By using this site you agree to its use of cookies.
Learn moreClose
Home Basics Downloads Support
Location: Downloads / GSnap / Manual

GSnap is an auto-tune effect. It can be used subtly to correct the pitch of a vocal, or, with more extreme settings, to create a robot-voice effect. It requires a monophonic input signal to operate. 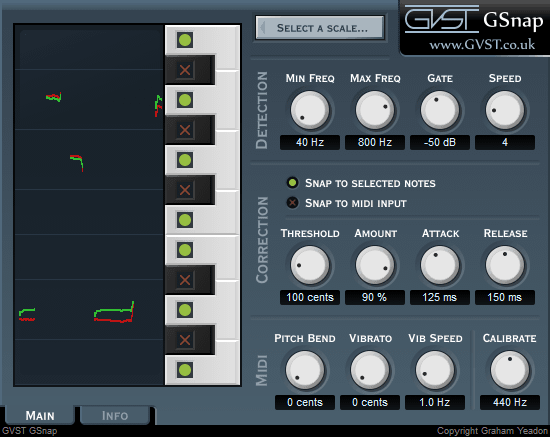 The GUI features a set of 12 knobs which control all of the plug-in's parameters. Each has its function clearly labelled above, and features a user-editable readout below. Additionally, twelve "switches" next to the pitch data view correspond to the twelve semitones of a full octave in the Western chromatic scale, and are used to supplement the "fixed" mode of GSnap. Two further switches allow the user to select between "fixed" or "midi" modes, explained below.

The controls are divided into three groups: Detection, Correction, and MIDI. The Detection section allows you to fine-tune GSnap's ability to deal with incoming audio. Correction determines the method and audible effect of the tuning algorithm. MIDI controls determine how GSnap deals with particular MIDI information.

To the left of the controls is a visual representation of the pitch of the source and "tuned" material. The source material appears as a red line graph, and the tuned material a green one. This can help the user zero in on problem notes, and also provide a secondary way (the primary being your ears!) with which to gauge GSnap's effect on the source material.

The incoming audio is first processed by this set of controls, which help give GSnap a bit of a break by narrowing down the range of frequencies and sounds that the plug-in has to deal with.

Min Freq: Allows the user to set the minimum frequency, in Hertz, that GSnap will consider for correction. If you know the lowest frequency that should be encountered, then setting this parameter can make pitch-detection more efficient and accurate.

Max Freq: This allows the user to set the highest frequency that will be considered for tuning. As with Min Freq, setting this can help the pitch-detection algorithm, making it more efficient and accurate. (If in doubt you can just open the Min and Max Freq settings right up).

Gate: Any source material at a level below this setting is not considered for tuning. You should set this so that GSnap ignores background noise.

Speed: The Speed parameter sets the number of wave repetitions required for pitch-detection. Lower values for Speed will allow faster pitch-detection but increase the chance of false detection, resulting in sporadic jumps in the audio's pitch. The default value should be fine in most cases.

Once a pitch has been determined, GSnap applies the specified pitch-correction. There are two modes of pitch correction: fixed scale and MIDI. Fixed scale correction has a fixed set of snap-notes, while MIDI correction is controlled in real time by MIDI data.

Fixed Mode: When this mode is selected, notes are "snapped" to a key of the user's choosing. Pressing the "Select Scale..." button located beside the "Fixed Mode" button brings up a dialog box:

A drop-down menu allows you to select the "root" of the scale, and another the "mode". Checking the "Set Threshold..." option will automatically adjust the Threshold parameter so that the chosen scale is enforced.

Once a scale is selected (or at any point in time with "Fixed" mode enabled), the user may add or remove notes from snap. All enabled notes in the scale are highlighted with light blue in small boxes on the "piano keys" next to the graphical display. Disabled notes are indicated with dark blue.

Midi Mode: When this option is selected, notes will snap to the nearest currently depressed MIDI note, sent either by a controller being played in real-time, or by a pre-programmed MIDI sequence. For this to work, your sequencer must be set up so that GSnap can receive both audio and MIDI messages.

Threshold: Defines the snapping region around each snap-note. A "cent" is a percentage of a Western semitone. For every 100 cents in the threshold, you add another semitone to the snapping region. A higher threshold allows GSnap to enforce wider "gaps" between notes in customized scales, although you can choose to leave gaps if you only want certain notes to be corrected, for example. For standard scales, 100 cents will allow for perfect snapping. With pentatonic scales, 150 cents are necessary (the largest interval in a pentatonic scale is 300 cents, setting the threshold to half of that ensures there isn't a gap between any successive notes).

Amount: Sets the amount of correction that will be applied.

Attack and Release: These parameters set how quickly a note reaches full correction and subsequently returns to no correction. As a general rule, an extremely fast attack will produce a noticeable and distinctly artificial "snap", but may be necessary to deal with certain phrases. Longer attack and release times can produce a more natural sound, but setting the times too long can also sound unnatural or be ineffective, so exercise caution.

When the user has selected "Midi" mode, these controls are used to set how GSnap will respond to incoming MIDI information.

Pitch Bend: Allows the user to set the maximum pitch bend. Since every 100 cents represent a Western-scale semitone, the maximum bend at 200 cents is one full tone.

Vibrato: Defines the maximum range of the vibrato applied by manipulating the modulation wheel or sending a mod wheel Continuous Controller (CC) message in a MIDI program. Like Pitch Bend, its maximum range is 200 cents or one full tone.

Speed: Represents the speed (in Hertz) of vibrato applied by MIDI when the user uses the modulation wheel or sends a modulation CC.

Calibrate: This control allows the user to calibrate the actual "tuning" of GSnap as it relates to the source material, with the number representing the frequency of the note "A" in your song. This setting affects the detected note and consequently the amount of correction.

The default of A=440 Hz is the standard tuning calibration, and should be fine for the majority of situations. However, there are many exceptions, such as when singing to a track with a fixed instrument (i.e. a pipe organ) that is tuned to A=435.

<< Back to GSnap
E-mail GVST Make a Donation