By using this site you agree to its use of cookies.
Learn moreClose
Home Basics Downloads Support
Location: Downloads / GRevDly / Manual

GRevDly is a delay effect that plays the delayed signal in reverse. Since only a time machine could enable an entire phrase to be reversed, audio is divided into "chunks". The reversed chunks are cross-faded to eliminate clicks. 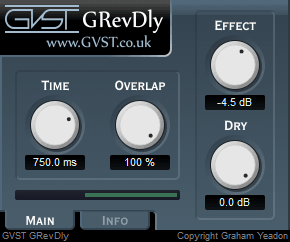 Four knobs control GRevDly's parameters. Each is clearly labelled above, with a user-editable readout below. Embedded into the GUI is an illustration of the signal path.

Time: The size of the chunks that are to be reversed and then repeated in the delay line.

Overlap: The length of the cross-fades between the reversed chunks. This eliminates clicking sounds that could otherwise occur at the "joins" between consecutive chunks.

Dry: The level of the original signal allowed to pass through. It is not an absolute value, but is relative to the amplitude of the source material (i.e. at 0dB, the source audio passes through at the same level at which it entered).

Effect: The level of the delayed signal which is passed through GRevDly. Again, the value is relative to the source.

<< Back to GRevDly
E-mail GVST Make a Donation